As always, please vote for which one is better. You can define better as "funnier", "more disturbing", "more relevant to the human condition", or anything else. 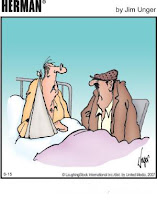 "But we can keep Grandma, right?"

"I told her I wanted a 'trial separation' so she tried to separate my shoulder!"
**
At first I thought, how can you not vote for the sad old man in the hospital bed? He just wants to keep his grandma or his wife or whoever it is he calls Grandma.

And who is that other guy?

But Family Circus Art / Herman Caption (FCA/HC) is intriguing too. Mommy is pulling expired food from the fridge, even seems kind of pissed off about it, and Dolly chooses just that moment to tell the family of an attempted maiming. Who was this person Dolly was trying to escape from? And will restraining orders be required?

I'm bucking my recent Herman Art trend and going with FCA/HT (or whatever the acronym would be), but mainly because I read it as Dolly talking to Jeffy about asking Mommy to have a trial separation from the old eggs, at which point Mommy got so pissed she yanked Dolly's arm out of the socket. Because you know that Mommy is hovering right on the edge...

I, too, am bucking my recent voting trend and going with the Family Circus art. Dolly is visiting us from Non Sequador in a way I can't resist.