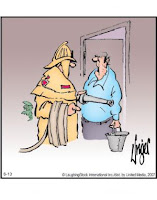 "I was a drawing a dog, but his neck got too long, so I made him a giraffe."

"We managed to put the fire out. Just do the front lawn."
**

I'm leaning toward #1 here, personally because of the pathos of older, sadder, lonelier people calling up firefighters to discuss failed art projects. Then again, Jeffy's cheerful obliviousness to losing his home in a fire is darkly fascinating. Yes, smoke filled the playroom but I continued to draw. Who set the fire? Has anyone seen Not Me lately?

I've noticed that vote totals for these things have dropped with each passing day. But I'm going to stick with it for a while longer. There's an axiom in public radio that just when a producer gets sick of a segment is when the public starts to like it. Not sick of this yet. Still weirdly interesting to me and hell, it is still just a blog. Some non-Family Herman content coming soon.

Also, please note: you can vote as often as you like. I may change that but at the moment, if you're a Herman Art fan, you can crush the Family Circus forces by just voting thousands of times.

Again voting for Herman, but solely because of the bucket. I want to touch the bucket, but I know I mustn't.