The me part:
So what's the lure of the contrived life?

"I've read a lot of traditional memoirs by people in their 20s, and so much is like ordinary life," says Seattle writer John Moe, who just finished writing "Conservatize Me," to be published this fall by William Morrow. In a variation on the fast-food documentary "Supersize Me," Moe spent last summer in a blue wool suit ingesting nothing but red-state culture.

"These books represent a possibilityof life, and that's what's so intriguing," he says. "It's not the life you would originally lead, but the life you can imagine."
Posted by john at 12:34 PM No comments:

I Thought I Was Just In The Seattle Post-Intelligencer...

but now the story is in MSNBC as well. A look at how unenthused Seattle fans seem to be about this whole Super Bowl Extra Large thing. And yeah, the Seattle paper (one of them) is really named the Post-Intelligencer.

Even sports fans not typically given to the cosmic are struggling to come up with reasons for Seattle's pleased but restrained response. John Moe, a radio talk show host and lifelong Hawks fan, blames disharmony in the stars. He devoted his Monday night show on KUOW-FM to a metaphysical exploration of the question, "Do Sports Matter?"

"We are in a tumultuous universe now -- a world that no longer makes sense -- because if you're a Seahawks fan, you don't understand this territory," he said in an interview.

"In Seattle, sports seasons don't end this way. They end in disappointment. So it's kind of like falling off a ladder and suddenly being able to fly.

"Also, I'm Scandinavian, and we tend to see joy as a postponement of sorrow."
Posted by john at 12:50 PM 4 comments:

Or Maybe It Has Something To Do With Tipper's Husband...

On a bus billboard this morning, I saw a url listed for goredforwomen.org. It seemed to be a charity thing but for the life of me I could not figure out why being gored could possibly help women. Was this a bullfighting thing? That was just a guess but then again the women in the picture were all wearing red, like a matador's cape. Then I pieced it together. Go Red For Women. Oh. Okay. Heart disease or something.

I choose to blame the American Heart Association for the confusion and not my faulty brain.
Posted by john at 1:44 PM 4 comments:

HIM: Dad, what does "ghost like Swayze" mean?
ME: Okay. There was this movie called Ghost and an actor in it named Patrick Swayze.
HIM: Is he a CRAZY SWAYZE?!
ME: Well, sort of. Yeah, I guess. And he played a guy who died and then came back as a ghost to visit people.
HIM: To scare them?
ME: No to be really nice to them. Help them with pottery, that kind of thing. So when you say "ghost like Swayze", you mean that you're leaving. That soon you will not be there anymore.
HIM: Ghost like Swayze!
ME: You want me to explain "I love those cupcakes like McAdams loves Gosling"?
HIM: No.

When watching the never-changing facial expression of Paris Hilton.

Seattle's University District can easily make one feel untethered from reality. The median age on The Ave, the main thoroughfare and location of some radio station where I work, is about 19 years old and it's a heady blend of fraternity and sorority folks, street kids, rich kids acting like street kids, toothless hoboes, and people running bubble tea establishments.

So yesterday when I saw a pigeon eating an entire container of spilled and melted Ben & Jerry's Cookie Dough ice cream, I just figured, Well whatever okay.
Posted by john at 10:07 AM 2 comments:

HIM: What does Steve Pool have to say today?
ME: Ach! Cloudy and rainy! Again!
HIM: What's wrong?
ME: Oh, it's just been so rainy lately. And it's going to just keep raining. And I want some sunny days here.
HIM: But Dad, it's okay. Maybe there are just a lot of flowers that need to grow. Think of the flowers, Dad.
ME: Oh. Okay.
HIM: If the weather isn't what you want, don't worry, it will change one day and be the weather you want.
ME: Okay, Charlie. Thank you. 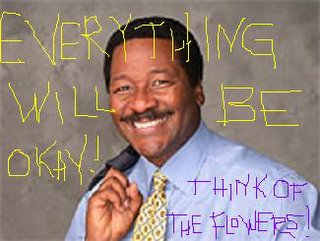 On the presence of friendship

So this wonderful article came out a while ago about some people in our lives who have made a difference in the world. And it talked about Kate (Age 3) and featured a picture of Kate with her dear friend Abbey, who was also born with dwarfism. We've received wonderful messages from most people (the Petco employee who cried was a favorite). But the weirdest and most asinine comment came from someone we barely know: "That's so great that Kate has a buddy!"

Because, like, of course she does! She has lots of friends, in fact. Many of them of average height. It turns out, person we barely know, that friendship is possible between dwarfs and non-dwarfs! Kee-rist.
Posted by john at 11:33 AM No comments:

And thank you, mappy thing!
Posted by john at 4:56 PM No comments:

An Almost Brush With The Law

This morning, coming across the Aurora Bridge, heading north, I might as well have been early-career not-quite-as-creepy Burt Reynolds for all my law flouting. I was not wearing a seatbelt, I was probably speeding, and, in a move I'm especially ashamed of, I was wearing an iPod. Recently the faceplate of my car stereo was stolen (just the faceplate, not the stereo, hinting at a robber who just wants to hassle me) and so usually I'm left alone with my thoughts. But there was this one song I really wanted to hear so I put on the headphones.

Then I saw the motorcycle cop with a radar gun. I hastily pulled off the headphones and fumbled for the seatbelt just as he was watching me (smooooth, Moe). But instead of justifiably switching on the lights and nailing me, he let me drive on by.

An hour later, I realized how disastrous it would have been had I been taken from the car and searched. There's this girl in my family who has been potty training. I had just dropped her off at preschool but forgot to leave all her extra supplies with her. So in my pocket, yep, little girls' underpants.

I figure with all those factors together, state pen for a year. Easy.

We both know, I think, that my daughter Kate was at least partially named after your song of the same name. My wife and I only figured that out long after she was born (one of our favorite songs, the name seemed to come to us spontaneously) but perhaps you knew all along. Sure, our Kate has some differences with yours (our Kate never hands out the Bhagavad Gita, doesn't smoke pot, cannot play Wipeout on the drums, gets wet) but also some similarities (when all words fail she speaks, squirrels and birds are frequently spotted nearby).

But none of this explains what happened last night. Our Kate spotted your CD "Whatever and Ever Amen", the one with the song "Kate" on it, not the case mind you, just the disc itself, which has no track listings on it at all. And she pointed at it and said "Look Dad! It's meeeeeee!"

So my question is this: have you been secretly contacting her?

**
Update: Apparently Kate's mom tipped her off to the whole thing earlier in the day. You're off the hook, Folds. For now.
Posted by john at 12:58 PM 4 comments:

A Conversation with Charlie (Age 5) About Current Affairs

HIM: But what's the name of your book?
ME: Probably "Conservatize Me".
HIM: What does that mean?
ME: Well, I tried to be a conservative.
HIM: And what is that?
ME: Well, there are two groups of people who don't agree on how things should be run. The conservatives think there should be a smaller government and not as many rules for how you do things. At least that's, you know, the theory.
HIM: So they trust people more?
ME: Ah...I...guess...so.
HIM: Do they like war?
ME: Lately they seem a little more interested in it than some other people do.
HIM: Well, that's not good.

HIM: Dad, where's the war?
ME: It's in Iraq. Way far away. Other side of the world.
HIM: If there was a fire at the war we couldn't see it from our house.
ME: Right.
HIM: And it's not going to come crashing through our wall?
ME: No way.
HIM: How do you get there?
ME: You go east, I suppose. For a long long time.
HIM: Which way is east?
ME: Like toward Bellevue. But much further, of course.
HIM: If you flew over the war, it would be red.
ME: Why would it be red?
HIM: From all the shoots. Dad?
ME: Yeah, bud?
HIM: I'm a good war guy. I would be good at war.
Posted by john at 2:28 PM 1 comment:

A Story About Kate (Age 3) And Lots of Other People 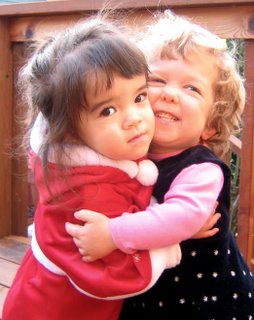