I'm hosting a lot the next few weeks so there probably won't be so many Monday updates. But onward we go and today we drift far from our humor moorings. 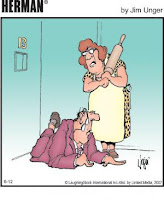 "The hardest thing to get in my house is permission."
**

I have to admit, I've been kind of rooting for Herman Art / Family Circus Caption for a while. I think FC Art has a bit of an ongoing advantage because it is inherently funny to see these insipid children saying things that denote the struggles of middle age. Meanwhile, characters from Herman Art saying these childlike things is just sad. I think today's Herman Art with FC Caption is okay, the woman delivering a riposte to the clobbered and cuckolded husband although I think the Herman Art with original caption might be more disturbingly fascinating. But today I have to go with FC Art. Billy is completely non-plussed at the idea of a home invasion. He thought his friend was a burglar but he wasn't prepared to do anything to save his home, possessions, or family. He was just sitting there. Then again, would you save Dolly?
*
*
*

I've got to go with the Herman art on this one, 'cause permission is the hardest thing to get in her house. Harder even than the pin she'll go upside your head with if you even ask for it.