This is the advice of Thelonious Monk as recorded by his saxophonist. 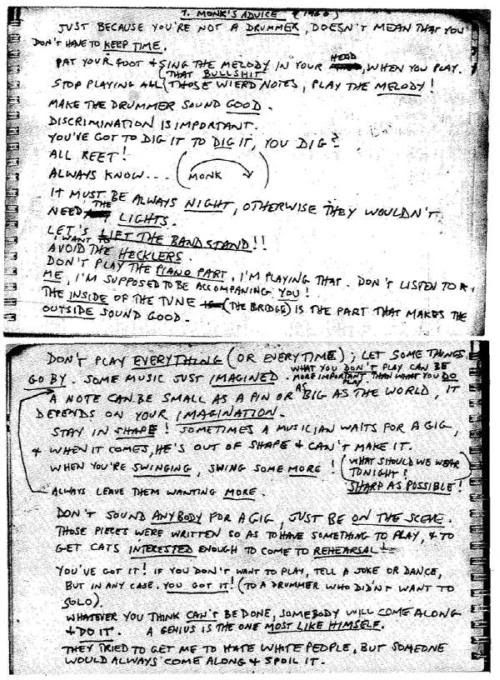 I Got No Quarrel With You

So obviously this blog is famous the world over for introducing the concept of I'm On To You. All the kids love it, Obama used it to get elected, it explains the Jonas Brothers. But I fear it may be too negative at times. We need positivitiness in America today (foreigners, don't sweat it, stay dour) so we got a new one this time:

I Got No Quarrel With You. For people, things, institutions that have been on the receiving end of backlash or criticism. But for you? They're fine. Come on. They're good. Or at least okay. You don't see the fuss. Why the hate? You got no quarrel.

Who/what/huh do YOU not have a quarrel with?

1. Queen. Every time I hear Freddie Mercury sing, I understand religion. I also mourn. Damn, what a beautiful miracle is that man's voice. Here's what I wonder, though: if we can stipulate that Freddie's voice is what made Queen a transcendent band and not merely a great one, if we can stipulate that a Freddie solo record would lack something, what is the SECOND element that makes Queen so fantastic? Lyrics? Backing vocals? Brian May's innovation? Brian May's slightly harder edge serving as counterpoint? John Deacon on the bass?

2. Closing up the penultimate show of Weekend America. Having done both in the past year, I observe that ending a show is similar to moving out of town. There is sorrow, there is a deathy feeling, but there is also hope for the next thing. I'm looking forward to saying hello instead of all these goodbyes.

3. Microsoft laying people off? Microsoft?! For college educated types from Seattle, Microsoft is like the post office. As the saying goes, if all else fails, there's always work at the post office. In my case, that's been the big Redmond company. Unnerving. Odd. Also, probably not as big a deal as people make it out to be.

4, Thought I had this morning: you know what we need around here? More snow. And now it's snowing. So I'm...adjusting?

5. It did warm up, though, and we heard birds singing and saw the bunnies out in the yard again. Spring will happen, pitchers and catchers report in less than a month.

A Conversation with Jill (age undisclosed) From the Past, About the Future

ME: So did the kids go down okay?
HER: Kate did but Charlie's still up.
ME: What's he doing up so late?
HER: Well, I was watching Oprah and he came downstairs. And Barack Obama was on. Then Charlie wanted to know who this guy was and I said he's a politician and he might run for president one day.
ME: So Oprah is on now?
HER: No, Oprah was on a few hours ago but Charlie's so excited about the idea of Barack Obama being president instead of Bush that now he just can't go to sleep. He keeps dancing around the room singing this Barack Obama song he just made up.

Still singing that dang song, too.

They're on to you, John Moe.

In a recent post, I talked about how Minnesotans are obsessed with weather and talk about it constantly.

It was swiftly pointed out that in the midst of observing this, I was obviously obsessed with weather and talked about it constantly.

Fair play. I will now accept this and revel in it.

1. Minus 20 this morning.
2. Minus 22 yesterday morning.
3. A tip in one of those parenting newsletters: blow soap bubbles with your kids and watch them freeze in mid-air. The bubbles, not the kids.
4. Nose hairs freeze and crystallize.
5. A couple at the Walgreen's was discussing which contact lens products would mitigate the risk of the lenses fusing to one's eyeballs.
6. Around here they call that "Minnesota Lasik".
7. It's terrifying, that cold.
8. It's also kind of funny. It's just so ridiculously cold, coldest around here in over five years by the way, that you just get amused.
9. You also wonder what would happen if the furnace stopped working and then the car wouldn't start and then the wolves came for you.
10. It's supposed to get into the pluses today. Possibly even breaking the freezing barrier early next week.
11. St Paul restaurants often have patios. I thought this was a bit silly for a while as the patios are often just some crappy tables out on the sidewalk where you eat your food as cars drive right by. I will not mock these patios again. I will fling myself upon the first table as soon as it is rolled out.
12. They have to replace Tavaris.

A Conversation with Kate (age 6) About Animals

(note: it was minus 22 at our house this morning)

ME: Boy, Kate. It's so cold I haven't even seen the critters outside lately. No bunnies, no squirrels. I hope the bunnies have dug some nice deep holes to stay warm in.
HER: Yeah. But what if they knock on the door?
ME: The bunnies?
HER: Yeah. If they knock on the door, what will we do?
ME: Well, of course we'd let them in.
HER: Yeah. And they can sleep in my bed. And hop around. Until summer, then we'd let them out.

Tickets to Kate's World will be available through a lottery system.

Here's a bunch of animated pictures of dead poets reading their poems. Is it creepy or is it beautiful?

One of them is Keats:


The answer: IT IS CREEPY.

Brent Barry is one of the more interesting guys playing in the NBA. He used to play for the Sonics and developed a real attachment to the city, living a very public life there. Here he writes, uh, a poem. About a team he no longer plays for and that doesn't exist.

I can't help but sit here and think of what this means,
For the fans in the city of Seattle and what seemed to be routine.
Like a ferry ride to Bremerton or fresh salmon from old Pike Place,
A cup of joe while on the go, crossing bridges at a snails pace.
But this season there is silence, a reason not to cheer,
The balls have all stopped bouncing and the Sonics are not here.
Now life has more to offer us than just a doctor's game,
But for most of you, and it includes me too, Let me remind you of some names...

The New Yorker has posted some submissions for their annual cover featuring the guy in the top hat looking all froofy.

You can even submit your own and perhaps you should.

ME: So you're doing another Pink Panther movie, huh?
STEVE MARTIN: Yeah. I just thought the original Peter Sellers ones were so funny and original and generally brilliant that I wanted to make more.
ME: Even though you did one a few years ago. You decided not to stop.
STEVE MARTIN: After this, who knows? I might keep going.
ME: I just think it's odd because it looks horrible, this movie. It looks stupid and over the top and just...just stupid.
STEVE MARTIN: Wow. Okay. Well, again, I just think it's a type of movie that was so great originally and I wanted to bring it back.
ME: Okay. Well, new topic then. Did I ever tell you I loved the 1983 Seattle Seahawks?
STEVE MARTIN: No, you didn't.
ME: Oh, they were great. Chuck Knox's first year coaching the team, Curt Warner was this amazing rookie running back. Dave Krieg was this scrappy quarterback. They made it to the playoffs and almost the Super Bowl.
STEVE MARTIN: Wow. That's great.
ME: Yeah, so here's what I'm going to do. I'm going to get that team back together except I'm going to start at quarterback instead of Dave Krieg. Then we're going to play against some modern NFL teams.
STEVE MARTIN: What? But all those guys are long since retired. Warner hasn't played in 18 years. And you have no business playing quarterback, especially today.
ME: But you don't understand, Steve Martin. I LOVED that team. I'm bringing them to a modern audience. And I'm inserting myself in the middle of it.
STEVE MARTIN: But that will be horrible to watch. Painful. Cruel, really.
ME: So you're saying that I should just leave the past alone? Let it be a good memory and that that's good enough?
STEVE MARTIN: Yes! Yes, of course!
ME: I see.

SCARLETT JOHANSSON: Hey, did you hear about my album? I recorded all these Tom Waits songs because I really like Tom Waits.
STEVE MARTIN: Really? Those songs are incredibly difficult. Not only are they very complex vocal arrangements but there's a depth of soul in them that is nearly impossible to pull off. I mean, you're a good actress and all but it's hard to see such an endeavor as anything but a vanity project.
SCARLETT JOHANSSON: You may have a point, Steve Martin. I guess just because you can do something doesn't mean you should.
STEVE MARTIN: Exactly. Hey, wait a min--
SCARLETT JOHANSSON: But here's the thing. Zillions of records get released all the time. Hell, with technology being what it is, anyone can put out an album that sounds professional. That means there's so much music that to hear anything in particular you need to seek it out. It doesn't come to you. So if someone thinks the idea of me singing Waits songs is ridiculous, well, they can avoid my record. I've had my fun, they've avoided it, no harm done.
STEVE MARTIN: Okay...
SCARLETT JOHANSSON: It's not like movies. If it's a big budget movie, it becomes a cultural event for anyone who consumes media. You can't watch TV or look at a newspaper without hearing about it. And God forbid you go to the theater, you may be forced to endure a three minute trailer for the goddamn thing. And if it's a horrible remake of a beloved film franchise, then it's like...uh...
STEVE MARTIN: Like what?
SCARLETT JOHANSSON: I guess I'll go with "someone pooping on your memory".