Margaret (age 6 months), I have something to tell you

It has to do with spoons and food. I have decades of experience using spoons to eat food. I've had soups, cereals, yogurts of many kinds. Your dad knows about this stuff.

I was feeding you tonight. Applesauce. A classic. And you got the idea that you had this eating from a spoon thing nailed. You've been watching me do it for a while, you figured, "How hard could it be?" I held out for a while but you were persistent. 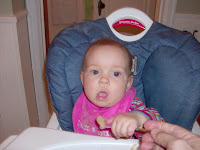 Well, it's harder than you think. Some things you should know about spoons:
1. When you tilt the spoon, the food will generally fall off.
2. After the food is eaten off the spoon, there is no more food on the spoon until you return it to the bowl.
3. The mouth is really the only place where the food goes in any substantial way.
4. Sure, the spoon is a lovely toy, I guess. Easy to hold, kind of shiny. But here's the thing: if you won't let go of the spoon and you also haven't mastered spoon technique, I can't feed you. Sure, you can complain because you're still hungry but it won't matter if you won't release the spoon. 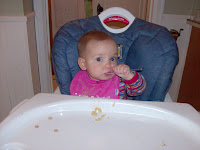 I applaud your confidence, Margaret, I really do. You are someone who, despite crapping your pants daily and occasionally toppling over from a seated position, looks at the world and sees something that can be grabbed, controlled, ideally shoved into your mouth. But there's a gulf between believing in yourself and true accomplishment. In other words, just because you KNOW in your heart you can work a spoon, that doesn't mean you can work a spoon. I love you, Margaret, and I embrace your confidence. In general, Margaret, my point is this:
Give me the SPOON. 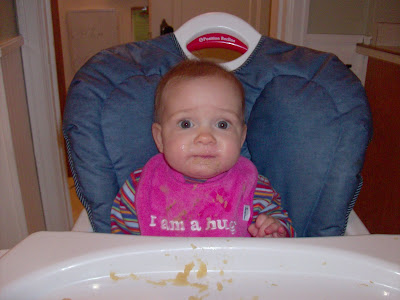 Yeah, that Bill Cosby has still got it.

I'm STILL on to you!

Inspired by a Twitter tweet (what?) from the estimable Scott Simpson, I realize we're way overdue for another round of I'm On To You.

You know the rules. Tell us who or what isn't fooling you for a minute. Tell us about whom or what the jig is up. The truth is out. Come clean. Put the topper on the cake, call Aunt Betty, strap the harness to the wolverines because I'M ON TO YOU!

I want you to have disturbing dreams.

A Modest Proposal to the Berenstains

Berenstains, look. I feel like I know you pretty well by now. That's because Kate (age 6) demands several Berenstain Bears books at bedtime every night and has for a while. I've read your family of bears deal with God, death, the Gimmees, all the big issues.

Here's something that we both know that a lot of other people don't: that shit is long. Your books. They take a lifetime. That means several long bedtime minutes - minutes I could be spending doing other stuff- spent putting up with all the elements of these bears' lives. Including:

So look, Berenstains, I've contributed many hours to your books. I've built up your brand. I couldn't do more for you unless I tattooed character illustrations on Kate's cerebellum.

And that's all fine.

All I want is one thing. One book where a human shows up, possibly just hiking through Bear Country, and the bears behave like bears. I want a mauled camper. Give it to me. Connect me with reality, Berenstains. Make it graphic.

This can be a secret edition, send it to me in a plain brown wrapper. I will acquire a wall safe and hide it there so the kids never see it, at least until they're eighteen, well sixteen, and can really appreciate it. Fourteen.

Do this for me, Berenstains. I'll never ask for anything again.

When you buy a grande' coffee beverage at Starbucks, there's always at least a decent chance that you're going to get my The Way I See It cup. I saw this and wondered if I'm part of the Straight Talk Express.