Oh There Will Be Rocking Tonight In Seattle

courtesy of the most important rock band in the world... 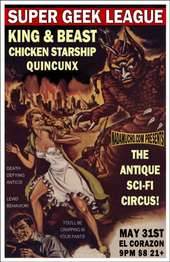 The largest thing in the life of Charlie (Age 5) right now is superheroes. Their history, morality, occupations, secret identity, it's all very important and must be discussed pretty much all the time. Spiderman, Superman, the Power Rangers, Ninja Turtles, Batman, all the big ones. But then a few weeks ago, Charlie mentioned how he and the other boys at his preschool like to be Action Boys. Turns out Action Boys are a squadron of superheroes based at the school who more or less spend their life battling the five-year-old girls in their class. Their preferred method for such battles? "We scream and run away from them!" reports Charlie.

Seems simple enough. But the other day, I overheard Charlie in casual conversation with a friend at school:

FRIEND: Yeah, I saw Action Boys on TV yesterday.
CHARLIE: Oh, which one was it?
FRIEND: It was when Action Boys battled the wolf monster. Like a really big wolf monster guy.
CHARLIE: Was I in that one?
FRIEND: I can't remember. Which one are you?
CHARLIE: I'm the red one. I'm the most powerfulest one.
FRIEND: Well, I know I was in it. I'm the turquoise Action Boy. I don't know if you were in it.
CHARLIE: I think so. I think I was in that one.
HIM: I think I'm the most powerfulest one.
CHARLIE: No, I think you're the fastest. The turquoise one is the fastest.
HIM: Oh.
CHARLIE: Was that episode three you saw?
HIM: Yes.

Turns out there are twelve episodes of Action Boys. And, of course, no there aren't. Charlie and his friends have imagined not just superhero pretend-play indentities, but ones that are fully licensed, serialized, and episodic. And dedicated to the cause of fighting girls by running from them while screaming.

I totally want a t-shirt. Can someone design a logo?

Update!: Someone did! A big shout out to the Kansas City Roller Warriors!

In Compliance with the Federal Self-Promotion Act of 2006

I now have a MySpace page dedicated to the cause of hyping myself to become more famouser and sell books that don't technically exist yet.
Posted by john at 3:05 PM No comments:

I Wonder If This Will Work

Technorati has a constantly updated list of most searched on terms. What if I worked them all into a few sentences?

Lordi! Jesse Macbeth and John Tierney bought a new Macbook? They must have been intrigued by the part in the DaVinci Code where Al Gore Pulls His Punches, and injures Barbaro. But has Jessie Macbeth seen the Dixie Chicks page on MySpace? Regardless, I hope that Madonna can defeat Jack Bauer, who as we all know is fond of driving his Opel while creating a Podcast update on Vista Beta 2. I guess unless we hear from Taylor Hicks and/or Katharine McPhee, we'll never know for sure. (those last two aren't on the list yet but I think it's a safe bet).
Posted by john at 1:07 PM 2 comments:

But I did go to L.A. for five days, filling in hosting on Weekend America. You can hear the show here. Highlights of the week included meeting the creators of the most awesomest pilot in the world, Heat Vision and Jack. And also unleashing Kate (Age 3) and Charlie (Age 5) upon the world, along with some of their classmates and teachers. They put me up at the semi-swanky Bonaventure Hotel in downtown Ballet. It's big and circular and seen in tons of movies, notable True Lies. In the evenings, I sat around and watched cable TV. In the day I made radio.
Posted by john at 11:14 AM 1 comment:

So I was at the circus school last night with Charlie (Age 5), he takes a rudimentary acrobatics/jumping around class there in preparation for his future career as an itinerant entertainer (or, failing that, carny). And I noticed they had a big butcher paper sign with a thermometer that represented their fundraising efforts being slowly colored in. I realized that I see these signs Everywhere. I. Go.

Almost all of the major institutions in my life involve fundraising:

* Circus school
* the preschool both kids go to
* the YMCA where I exercise and the kids take classes
* public radio where I work
* and, when you think about it, my home since aren't we all fundraisers for ourselves?

I tell you, if Starbucks or Safeway starts holding pledge drives, there will be nothing left.

It makes me wonder if I should be doing something more lucrative with my life.
Posted by john at 1:18 PM 1 comment:

How Is Your Book Going?

Haven't written one of these in a while, have I? Probably because every time someone asked me in real life I just shook my head and muttered something and then ran away.

It
Was
Hard
Writing
A
Book.

But after struggling through some wonderful edits by my wonderful editor over the last few months, I managed to cut down the manuscript from 122k words to about 89k. Sections of reading Hannity books at bauhaus coffee in Seattle, watching a lot of Fox News, and visiting the Quayle museum in Indiana were all cut. Other parts were cut down. There's a lot less reflection than there used to be. More action. And a completely re-written last chapter.

Along the way, the jokes I wrote way last summer had long ceased to be entertaining. Were they still funny? I had no idea. Did the chapters fit together? Guess so. Was it well written? Uh...maybe.

Fortunately, Beloved Editor seems to like it just fine and he's a bigshot New York editor. It's off to copyediting, then galleys, then book. I'm apparently going to Washington, Boston, New York, LA, San Francisco, and Portland on the tour. Nowhere in the middle of the country, evidently.
Posted by john at 5:02 PM 5 comments:

A Conversation with Charlie (Age 5) About Superheroes

HIM: So in Batman is The Joker a funny guy?
ME: Not really, no. He's mean.
HIM: But he makes jokes!
ME: Yeah, but he's not really funny.
HIM: Well, what kind of jokes does he make? What kind of jokes aren't funny?
ME: Maybe ones that make fun of people.
HIM: Or boring ones! Maybe he makes boring jokes! Like, knock knock.
ME: Who's there?
HIM: Oh (long pause) ...work...
ME: That's the joke?
HIM: Yeah. Maybe The Joker makes jokes like that.
ME: So he's got a super power of making really boring jokes that aren't funny?
HIM: Yeah, I think so.
Posted by john at 8:22 AM 2 comments:

There is no worse song than Styx' Grand Illusion. I checked. Not even Gypsies, Tramps, and Thieves.
Posted by john at 11:56 AM 12 comments: