That's how long the book currently is. That many words. 255 pages of single spaced Times New Roman 12-point with blank lines between graphs. As of today at 11:48am when I wrote the last word of the first draft. I actually wrapped up the draft of the main part of the book last week but I had all these sidebars to write up about Red Dawn, The Patriot, Brazil, and some other movies. But today I finished the last of those (Return of the King). And I put everything in one big doc called "Book1". If I die, please search for that on my computer, edit it, and publish it.

Well, back to work. Now I have to whip it into something that's actually somewhat halfway quasi-good.
Posted by john at 12:04 PM 2 comments:

Someone with an easy job

Randall Samborn. Never heard of Randall Samborn? Preeee-cisely. He's Patrick Fitzgerald's spokesman. You know the guy who's leading the investigation about which nothing is ever revealed? This from the New York Times, tomorrow edition:

Mr. Fitzgerald is expected to hold a news conference at the Justice Department in Washington on Friday. His spokesman, Randall Samborn, declined to comment.

How awesome is that? You're a spokesman and you decline to comment. It's like a barista who just isn't all that into the whole coffee making thing. Randall Samborn. Nice going.
Posted by john at 8:53 PM No comments:

It's been a while since blogging died...

But it just died again. This time it was killed by Dennis Hastert who begins his first entry, yep, "Welcome to my blog".
Posted by john at 12:26 PM No comments:

A Call to Arms and Pens and Computer Drawing Programs

My pal John Hodgman has this kickasssss book and along with it a website and along with that an audio recording of himself reading the names of 700 hoboes. My other friends at BoingBoing (I have other friends than just John and BoingBoing; I have three others) have issued a clarion call for illustrators to draw all 700 hoboes. This is very important. We need to understand our hoboes in this world. Entries have started coming in at Flickr where artists should post their hoboes. 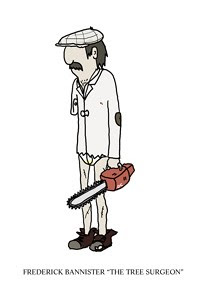 A Conversation with Charlie (Age 4) About Home Security

HIM: Dad, I have an idea for what we should do if there's a robot in the house that's smashing everything.
ME: Okay.
HIM: We should get a bulldozer made out of cardboard.
ME: And what would...ah...how would that help? Would it crush the robot?
HIM: No, it would move the robot into a barrel of leaves so the robot would stop smashing the house apart.
ME: Full of leaves?
HIM: Wait! No! Not full of leaves! Because I want the robot to have room to run around.
ME: In the barrel.
HIM: Yeah. We don't have anything remote controlled.
ME: No. Should we get some things like that?
HIM: (after some consideration) Yes.

ME: Why does the bulldozer need to be cardboard?
HIM: We don't know anyone who has a real bulldozer. It wouldn't fit in our house.
ME: But a cardboard one would?
HIM: Well we could try.
ME: If it's a robot smashing your house, you try anything right?
HIM: Yeah.
Posted by john at 7:22 PM 4 comments:

A Conversation With Charlie (Age 4)

HIM: Dad, Kate and I are here to take the place of other people.
ME: What? What do you...huh?
HIM: You know how Grandpa Moe died? And his last name was Moe?
ME: Yeah?
HIM: My last name is Moe now. And Kate's last name is Moe. We're here to replace people who have died.
ME: Oh.
(long silence)
HIM: DINOSAUR!
Posted by john at 11:04 AM 3 comments:

Can't understand what you're saying, you're speaking Canada.

Steve Nash is the MP3 of the league in a new Ali G NBA commercial. And it's funny.
Posted by john at 9:36 AM No comments:

Well...uh...it's like this. You know how you sometimes hear about writers struggling to end the book? And when you hear that you think Well hell, how about, I don't know, a PERIOD? So that's where I am. I'm in the last chapter. I think I have about 500-1000 words left to write. Then I need to write up about 12 one-page sidebars that will go with it. That will bring the aggregate word count to about eleventy zillion.

But that will also mean the first draft will. be. done. And then the second draft begins. And the third. And the eleventy zillionth. But after that first draft, hopefully completed this weekend, I plan to maybe have a beer or something.
Posted by john at 9:37 PM No comments:

Made up words from The Simpsons. (also found everywhere online by now, no doubt)
Posted by john at 11:25 AM No comments:

I Was Thinking About This Yesterday...

Did Madonna really star in a big screen version of Evita? Did she really play Eva Peron in a movie? Was Antonio Banderas really in it too? Did all of that really happen? Really?
Posted by john at 8:26 AM 2 comments:

The Correspondences of Harriet Miers and George W. Bush

Can be found here. Andrew Sullivan describes it as "mutually excruciating".

I Suppose I Could Eventually Stop Staring At This...

But at the moment I don't really see how. Click on him to fling him about.
Posted by john at 3:58 PM 2 comments:

Some Questions About People I Observed Today

1. If you have all those Christian bumper stickers on your car and then I allow you into my lane in front of me, shouldn't you wave? Because wouldn't Jesus?
2. I know that the environmentalist group WASHPIRG is not picky about who it hires to gather signatures on petitions, but, young signature gatherer, are you already so jaded and dispirited that you're just going to sit on the curb like that?
Posted by john at 1:15 PM No comments:

From the Chicago Tribune (via the estimable Matthew Baldwin)

The good parts about writing a book: the place you are reserving for yourself in history thus mitigating your anxiety about death, the advance check, the creative act of writing which can be quite fun and satisfying in so many ways.
The bad part about writing a book: how it rips your life apart.
Posted by john at 8:34 PM 2 comments:

1. When exactly is the election?
2. Can someone explain specifically what the wording on the initiative is?
3. Has anyone seen my voters guide?
Posted by john at 11:23 AM 2 comments:

When the WSJ editorial page turns on you...

You've got worry.
"Even a star quarterback with years of high school and college football under his belt takes years of experience and hard knocks to develop the knowledge and instincts needed to survive in the NFL. The Supreme Court is the big league of the legal profession, and Ms. Miers has never even played the judicial equivalent of high school ball, much less won a Heisman Trophy."
Posted by john at 11:32 AM No comments: