Actually, we had a lovely time on the train 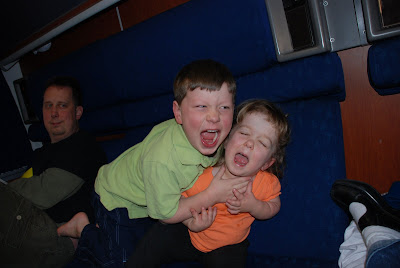 Although it's true that, as the photo would indicate, the children did become a tad restless.

So second part of the story. The house sold rather quickly, like I said, and we knew we had a closing date of 3/3. So we booked our train tickets for that afternoon. Understand that in late January, March 3rd can seem like a lifetime away. We slacked off about a week and then began packing, making phone calls, solving puzzling situations. It was exhausting in every single way: physically, emotionally, spiritually, uh...uh.. dermatologically! We got the flu. We got along. I went insane a few times.

I think I was prepared for the hard work but what took me by surprise was the psychic toll of all that is related to moving. More than once it felt like death: you say goodbye to people, you get your affairs in order, (loading up a moving truck - that part not so much), and you wait to be reborn in this other place that you don't really know all that well. Sometimes you have to go through your personal papers too. You break up your rock bands.

And the thing is, you really don't know how to pace it. I've never moved like this before. Does it require 12 hours of work per day? Two? By the time we got down to the final day, it was also down to the wire. We finished packing at about 3:24pm on 3/3. We had to leave for the train station by 3:30. Jill and I did a final moment in our house that was not unlike Chevy Chase and Beverly D'Angelo checking out the Grand Canyon in National Lampoon's Vacation. Then, weeping, off to the train.

Hear me now: TAKE THE TRAIN. But also DO IT RIGHT. We had booked passage on the Empire Builder. It's a train financed by various neoconservative think tanks. Not really. But it is called the Empire Builder. Don't go coach, you'll never sleep. You get a sleeping compartment that converts by day into a regular compartment with seats, a conversion enabled by a porter. Getting said sleeping compartment means you're a First Class Passenger and thus your meals in the dining car are all covered (total bargain, by the way, if you book carefully it's not even very pricey). Best yet, the waitress in the dining car gets to know you over the course of the trip. "Pancakes and orange juice, Charlie?" she asks my much delighted boy.

But man, the train is great. Big windows, leisurely pace, and you get to see America from the ground. If you need a kid friendly adventure and you're not in a hurry, take the train. At least once.

We left Seattle around 5:45pm, dozed off around Moses Lake or Ellensburg even. Woke up in Glacier National Park with all its glacial majesty. Slept the second night somewhere in mid-North Dakota and woke up north west of the Twin Cities, arriving in St Paul around 9am. Stepped off a train and into our new life. Which felt infinitely cooler than walking out of a jetway and into the MSP airport terminal.

One regret: we didn't bring enough to read or play with. The kids had Pokemon DVDs, we had a few novels we had never read before (which turned out to be novels we still didn't want to read) and one New Yorker I grabbed from beside the bed on Monday afternoon. And it turns out the Havre train station doesn't exactly carry the Utne Reader. Or Sports Illustrated. Or anything. So we kind of had to make do. And we did. Train = awesome.

Then we got to our new house and the kids started playing in the snow. A practice that will continue on this the first day of April. There are several inches of freshly fallen from yesterday. No fooling on that one.

UPDATE: But no wi-fi on the train! Be warned!

Extra books...check. Toys and games...check. One question remaining: any murders or spies on the train, or are they all on the Coast Starlight down to LA?

That picture? Is. Awesome.

In other train-related detailia, I fear the nuts I gave you guys may have been overcooked. I am happy to report that 15,000 batches later I am still overcooking them. Huzzah!

I so want to take a long train trip. I have a friend who's going from Houston to LA and then to Seattle to visit her family. She older, she has time, why not? Why not, indeed. I keep saying that needs to be our next vacation. Either something like you did or maybe across Canada.